We are pleased to announce that the Chihiro Art Museum (Tokyo & Azumino, Director: Tetsuko Kuroyanagi) received the 2019 Carle Honors Bridge Award. It is the first time for a Japanese (individual or group) to receive this honor. 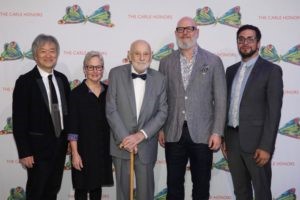 The Carle Honors Bridge Award recognizes individuals and organizations who have found inspiring ways to bring the art of the picture book to larger audiences through work in other fields. The Chihiro Art Museum was awarded for being a pioneering museum devoted to illustrations for children’s books, as well as an international inspiration to every museum who champions illustration, the Carle said.

Takeshi Matsumoto, the son of Chihiro Iwasaki and an advisor of the Chihiro Art Museum, attended the ceremony, and a video speech by the director Tetsuko Kuroyanagi was also shared at the venue. She said, “I am greatly honored that our museum has been selected for this year’s Carle Honors Bridge Award. Chihiro Art Museum opened its doors in 1977 as the world’s first museum specializing in picture books. Since then, we have worked to spread Chihiro’s lifelong wish of “Peace and happiness for all the children of the world.” We believe picture-book illustration to be a precious cultural legacy, and have pursued picture books as art as a means of promoting understanding and cooperation with the people of the world. We are proud and honored that our museum’s activities have been recognized with this award and aim to continue our activities with your support“, and was very well received by the audience.