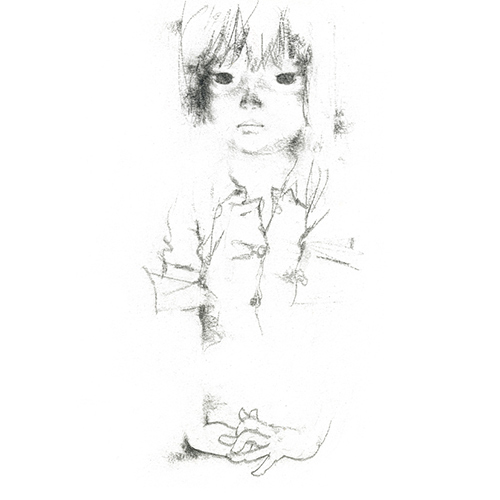 Chihiro Iwasaki, The Girl Gazing Ahead from Watashi ga Chiisakatta Toki ni (When I was a child)(Doshinsha), 1967

Ishiuchi Miyako continues to photograph selected relics of victims of the 1945 atomic bombing that are preserved in the Peace Memorial Museum in Hiroshima, particularly items that were in direct contact with the victims’ bodies. The dresses, shoes and blouses featured in the photographs, shot in natural light, almost appear as though they are floating, enabling viewers to almost sense the breath of life of those who wore them. Chihiro Iwasaki created three picture books based on the theme of war, the first of which was Watashi ga Chiisakatta Toki Ni (When I was a Child) (1967), which combined illustrations with poetry and essays written by children survivors of the Hiroshima bombing. Employing a monochrome palette, Chihiro endearingly portrayed the children in a pitiful state. We hope that you will enjoy the work of these two female artists based on “Hiroshima.”

Exhibition Series: Life
In 2018, Chihiro Art Museum (Tokyo, Azumino), in commemoration of the 100th anniversary of Chihiro Iwasaki’s birth, will explore a new type of exhibition in collaboration with artists active in various fields, all of whom are engaged in activities that focus on the theme of “life.” These artists are all producing new creations inspired by Chihiro Iwasaki, whose sensibilities resonate among them. Through the Museum’s collaboration with these seven artist teams, we will see the unveiling of a new Chihiro Iwasaki world.